Artemis Fowl and the Arctic Incident

This is a review of “Artemis Fowl and the Arctic Incident” by Eoin Colfer. It is the second novel in the Artemis Fowl Series. It follows on from “Artemis Fowl“.

As this book is a part of a series, the following review may reveal some details of the previous novel/s. Do not read if you intend to read this series in the future and don’t want to know of any potential plot spoilers.

The story begins three years prior, the Russian Mafiya has just come into possession of a valuable person, none other than Artemis Fowl Senior. They’re biding their time (and making sure that AF Snr doesn’t die on them), waiting for the perfect opportunity to demand a ransom. They decide that this opportunity is three years after they take him, in the present day. Artemis (the second) is contacted via email and he knows that a ransom will shortly be demanded.

Meanwhile, the LEP are having their own problems. Captain Holly Short and Private Chix Verbil are conducting a routine stakeout, when they unearth an illegal goblin smuggling ring. They attack the two LEP fairies using old outlawed softnose lasers, powered by highly illegal human batteries. Holly suspects Artemis Fowl of having an involvement.

Who is supplying the Goblin Triads with human technology? Can Artemis convince the LEP he is innocent of involvement? And can he save his father and get his family back to normal?

I enjoyed this Artemis Fowl novel as much as I enjoyed the first. Colfer is great at creating different characters, all likeable for lots of different reasons. I admire his strong female characters and the environmental messages in his books. 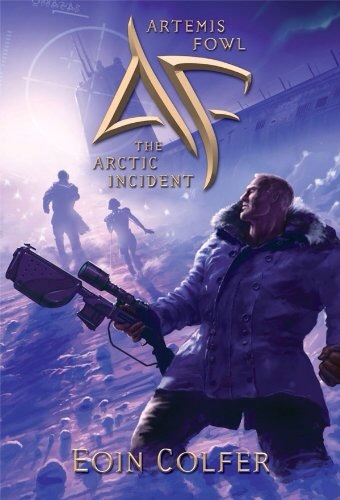 2 thoughts on “Artemis Fowl and the Arctic Incident”